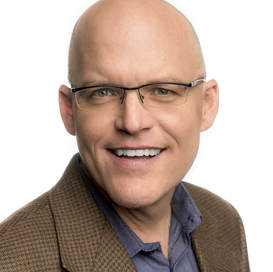 With over 30 years of experience in marketing, branding, technology development, interactive media, business design and executive leadership, Bob Cooper launched one of the first firms in the United States to focus exclusively on service design. In fact, this is his second time on the “frontier” of a macro trend.

In 1991, at the age of 29, Bob Cooper quit his full-time marketing job, raised a small amount of angel investment money and started an interactive marketing company called Frontier Media Group, Inc., based in Malvern, PA. The company was a pioneer in the development of high-impact multimedia for sales support, training and entertainment. Over the next seven years, Frontier Media Group grew to become an internationally recognized firm, employing over 75 people with consistent net profits in the upper teens. Leveraging the advent of the World Wide Web in 1995, the company was well regarded for its consulting, design and production services related to interactive marketing for Fortune 500 clients including: Merrill Lynch, Procter & Gamble, Pfizer, Verizon, Du Pont, Comcast, Rohm & Haas, ARAMCO, Children’s Television Workshop, the Philadelphia Flyers and others. Frontier worked with clients in the United States, Canada, the United Kingdom, France, Japan and Saudi Arabia.

Realizing that the time was right, Cooper sold Frontier in May of 1998 to Icon CMT, a NASDAQ traded company based in Weehawken, NJ. In doing so he earned his investors a 70X return on their investment. Four months later, Qwest Communications (now CenturyLink), acquired Icon CMT. At Qwest, Cooper served as Senior Vice President in charge of Strategic Consulting where he built a nationwide staff and worked closely with Qwest’s major account teams to develop Internet and e-commerce strategies for Fortune 100 corporations.

​He left Qwest in the fall of 1999 to launch his own consulting firm, Ricochet, Inc., and worked with a wide variety of start-up entrepreneurs and venture capital firms in fund-raising and due diligence efforts.

From 2001 to 2002, Cooper served as turnaround CEO for Vertical Alliance, Inc. , a VC-funded enterprise CRM application developer in Plymouth Meeting, PA that had fallen on hard times as a result of the economic downturn. Very quickly, he repositioned this technology product company into an ASP (application services provider) for the sports and entertainment ticketing industry and within nine months found a strategic buyer for the company. The company is still serving the ticketing industry as Vertex Tickets.

In 2004, Cooper served as turnaround CEO for RealTime Media , an online marketing firm based in King of Prussia, PA. While there, he streamlined operations and established a new market position for the company – compliance-based marketing – which leveraged the company’s expertise in the legal aspects of web marketing. In addition, he helped to recruit a new full-time CEO who continues to grow the business. .

In 2005, Cooper served as interim COO for Qbit, LLC, a data compression software firm in Bethesda, MD co-founded by John Sculley, the former CEO of Apple Computers. While there, he clarified the company’s strategic position within the entertainment and consumer electronics industry.

From 2005 until 2008, Cooper served as an advisor to founder/CEOs of mid-sized businesses to refine their strategies and build their revenues. Much of this work centered around identifying entirely new sources of revenue, as well as sources of recurring revenue. After generating the go-to-market concepts, Cooper also oversaw the market research, service design and the marketing launches of these projects. He guided a number of his coaching clients through strategic acquisitions, ranging in value from $5 to $20 million.  During this period, he also served as an adjunct professor in the MBA program at Penn State, where he designed and delivered a course entitled, “Growing a Professional Services Firm.”

In 2007, Cooper helped raise the initial venture funding for AnySource Media LLC, a developer of software that could be embedded directly into HDTVs and other consumer electronics devices with a data center back-end to support easy and fast TV navigation and e-commerce transactions. Just two years later, AnySource was acquired for $15 million by DivX, Inc (NASDAQ: DIVX) and the core AnySource software was integrated into LG HDTV and Blu-Ray players. Since then, DivX was acquired by Sonic Solutions, which was then acquired by Rovi.

In 2011, Cooper helped co-found Zonoff, Inc. a firm that provides a comprehensive software platform to channel partners like electronic device makers, service providers and retailers who, in turn, deliver “Connected Home” products and services to the consumer mass market. In addition to being an investor, he served as Chief Marketing Officer through 2014, and continues to serves on the board of directors. In 2015 Zonoff raised $31.5 million in a series "B" investment round from both venture capital firms as well the home security firm, ADT. This round valued Zonoff at $130 million. Zonoff technology now plays a key role in Amazon's Home Automation services business.

Cooper has served on the boards of various Philadelphia area companies and non-profit organizations including AnySource Media; FMP Media Solutions ; ColorQuick ; and the External Affairs Committee of the Penn Center for Bio-Ethics at the University of Pennsylvania. He currently serves on the board of JW Pepper.